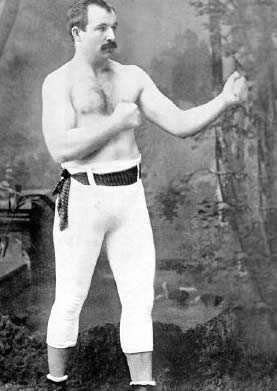 My great grandfather, Lorenzo Snow, opened the original Trinity Boxing Club over 100 years ago in lower Manhattan in what was then known as the Five Points. Lorenzo grew up in Ireland, the twelfth son of a potato farmer. From childhood, he suffered from hypoglycemia, a condition that made eating starchy foods nearly impossible. Scorned by peers and shunned by family, Lorenzo left Limerick for America.

After arriving in Nantucket, Lorenzo quickly found work tending bar. As fate would have it, heavyweight champion John L. Sullivan, the Boston Strongboy, strode into the bar one evening and proclaimed his now legendary boast -” I can lick any sonuvabitch in the house”. Lorenzo, a devout Christian and unfamiliar with American lingo, informed Sullivan that it wasn”t that type of establishment. Outraged at what Lorenzo had just inferred, Sullivan let fly the famed “hand that shook the world.” Unfortunately for John L., Lorenzo had been well prepared for such an attack, having spent years being educated by nuns. A slip to the right, a hook with the left, and Sullivan”s words rang hollow – Lorenzo Snow was one sonuvabitch who would not be licked.

Pacifist by nature but capitalist by nurture, Lorenzo struggled with the lure of professional prizefighting. Spiritually rich and financially poor was a condition that caused Lorenzo great anguish. Night after sleepless night was spent wrestling with his conscience . All of that changed when, while tending bar one evening, Lorenzo met Margret “Maggie” McEldowney, a vaudeville performer and herself a professional boxer. Conversation led to courtship, and courtship to matrimony. Although Lorenzo still spent night after sleepless night wrestling, it was no longer with his conscience.

Nine months after their wedding, Maggie gave birth to a daughter, Trinity, the first of twenty one children. With more mouths to feed at home than there were mouths to drink at work, Lorenzo took to prizefighting. Over a span of just 6 years, he had amassed an unbelievable record of 168-2, with 156 knockouts. While in training for a title shot against nemesis John L. Sullivan, Lorenzo was suddenly struck with a particularly virulent strain of pink-eye, leaving him blind in one eye and near-sighted in the other. Faced with the choice of boxing and risking total blindness, or retiring and just having to wear a monacle, Lorenzo chose the latter.

Never one to see the glass as half empty, Lorenzo began in earnest to teach the Sweet Science to his progeny. Like any good parent forced to live vicariously through their kids, Lorenzo wanted only the best when it came to their training. Since boxing was illegal , and backalley gyms were no place for kids, Lorenzo created a “boxing speakeasy,” and called it the Trinity Club, named after his firstborn. Some of the notables that trained there included bareknuckle greats Jake Kilrain, , Paddy Ryan, Joe Choynski, heavyweight champions James Corbett and Bob Fitzsimmons, authors Jack London and Ernest Hemingway, NYC Police Commissioner Theodore Roosevelt and erstwhile foe turned friend John L. Sullivan ( who later served as godfather to child #14, Elmo.)

The business flourished. Lorenzo didn’t. In 1919, Lorenzo fell victim to the Spanish influenza. Maggie continued to run the club until 1920 when the Volstead Act ushered in Prohibition. Now that boxing was legal in New York, Maggie renamed the club the Trinity Boxing Club and continued to operate as a speakeasy, only this time surreptitiously serving alcohol instead of leather. Some of the biggest names of the day, among them Al Capone, Al Jolson, Charlie Chaplin, Charles Lindberg, Rudolf Valentino and second cousin Joseph Kennedy, would find their way to the club to do a few “rounds.” For Maggie, her 21 children and 96 grandchildren, life was good.

On October 28,1929, acting on a tip from cousin Joe Kennedy, Maggie was on her way to the New York Stock Exchange to sell her substantial stock holdings. At the same time, a despondent young broker named Peter Jakobson was leaping to his death. Life literally came crashing down on Maggie.

Maggie’s funeral drew well over 2,000 people including celebrities and dignitaries from all over the world. The Snow clan, not only fatherless, but now motherless and penniless as well, felt it only fitting that the club go with them. On December 31st, 1929 they closed the doors on the Trinity Boxing Club.